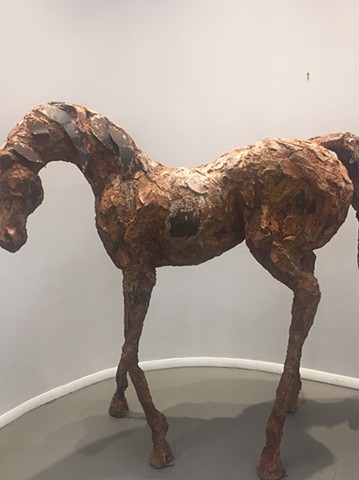 Artist Siri Hollander was born in New York in 1959 and lived most of her childhood in Andalusia, Spain. Influenced by a family of artists, she began sculpting at the age of seventeen. Seemingly isolated from normalcy, Siri established a connection with the horses and other animals that surrounded her in her youth. By apprenticing with several accomplished sculptors both in America and Spain, she developed her own sculptural form based on her unique subjects, horses and figurative forms.

Hollander’s sculptural medium combines steel and cement creating her trademarked texture, which when cast in bronze bring her sculptures to life. The freestanding sculptures range from monumental to smaller tabletop works. With extraordinary focus and conviction, Hollander works independently of the trends in art movements. Her art flows naturally from her daily life, without dependence on outside factors. She has become a master of three-dimensional images of horses and more recently has developed her figure sculptures, greatly influenced by the emotional impression in the sculptures of modern masters. Hollander’s self-taught process constructs the sculptures with no sketches or maquettes, working directly with steel and recycled metal to combine realism and abstraction, emphasizing the rough essence of the subject.