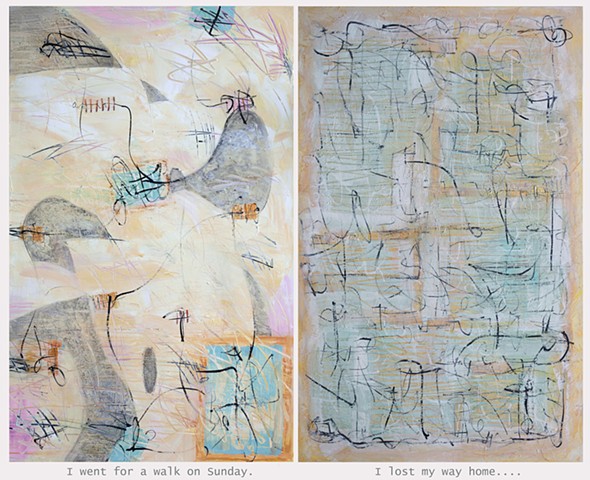 Inspiration: For the artist, inspiration comes from both external influences and internal feelings which effects the way the external is perceived, viewed or accepted.

We all know this to be true. Some artists are inspired by beautiful scenery whilst others are moved by darker seedy city and street-scapes. Svein is not moved to paint beautiful green valleys, seascapes or street scenes. He is a studio painter. His subconscious collects information, which then becomes visible via his abstract paintings.

A new abstract series 'Street Scenes' glimpses of Brugge street life are exposed in symbolic marks representing the often chaotic bike riders with headsets, groups of tourists led by a coloured umbrelled guide and trotting horse carriages are all brought to life on canvas.

The beauty of abstraction is for the viewer to interpret the artist's work finding stories of images hidden within the canvas.

Koningen's Wilderness series, is inspired by the northern Provence region of France. The fields of lavender and sunflowers are depicted by bold splashes of vivid purples and bold golden yellow.

Koningen's passion for abstraction was born out of an Arts & Industrial Design education in the 1960’s. His introduction to art began as a very young child with visits to the Rijsmuseum with his Dutch grandparents, educating the young Koningen on Rembrandt and the Dutch Masters.

Koningen was born in the shadow of WW2 in Trondheim Norway. His Norwegian mother met his Dutch father in Oslo amidst the German invasion of Norway. At the end of the war his mother went home to Trondheim to have Svein whilst his father had to wait out the Norwegian war trails in Oslo. He had spent his war years as an enforced labourer whilst working with the Dutch underground. Quickly freed he was sent home to Amsterdam where his five month old, son Svein, and his wife joined him. The family moved to Geelong, Australia in 1953 where Koningen studied Art & Industrial Design at the Gordon Tech, Geelong. Koningen spent a year as a designer before moving to Curacao, in the Caribbean to manage the family business. Family and business ensued for the next 20 years until mid life Koningen rediscovered his passion for painting, left the corporate world behind committing himself full-time to his craft, painting.

Other works include ‘Metal & Lace’ juxtaposes the new and old industries becoming one sculptural work forming shadows and light. The fusion of masculine and female energies, hard and soft, lace and metal, old and new, adds a layered dimension to the perception of the work.